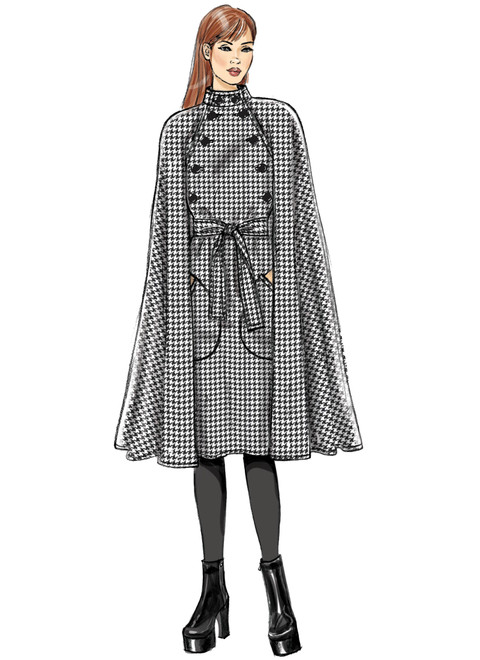 I was so intrigued when I came across Vogue 9288 a couple years ago that I feverishly hunted it down online (I *think* this was a pattern I couldn’t find in my size on etsy or ebay so I ended up buying it from an IG follower who had it in their stash), and waited to come across the perfect fabric for it. That day came when my friend Mimi destashed some of her fabric onto me and I received several yards of this perfectly-autumn-orange boucle that kind of looked like muppet fur and definitely looked fun and interesting. It took me a while to get around to finally cutting the project out as I was waiting for LA to get cold enough (sigh…I’m still waiting!) but by the time I did, I had made a HUGE mistake- I missed tracing and cutting out one essential pattern piece for the cape, the front center panel that each side of the cape buttons onto! So I had cut out all my pieces from fabric thinking I had PLENTY of room and not being frugal with the placement at all! Of course, by the time I realized what I had done, it was too late- there was not enough fabric left to squeeze that front panel from, not even enough to try and Frankenstein something together (although I’m sure I could have made it work with more thoughtful pattern placement). I searched EVERYWHERE for a remnant of this fabric- the fabric Mimi had originally purchased it from was out, so then I made inquests on instagram for anyone who might know where to find it, googling “orange boucle” fabric and scouring all the results. I found myself on European fabric store websites translating the pages to English, thinking I might have found it, but alas it just was not meant to be. I banished the pattern to the back of my filing cabinet because seeing it brought me too much grief- what a waste of all that pretty fabric due to a shitty mistake on my part! But eventually enough time passed that I found myself re-inspired to cut out the pattern once again. This time the inspiration came from a beautiful (and also very autumnal!) wool I was gifted from The Fabric Store. It’s a classic plaid made of brown, tan and orange hues and it’s not-too-beefy for our mild LA winters. As soon as I saw it, I was both excited to use it and annoyed with myself for always finding a way to make yet another coat or jacket even though I live in a part of the country that gets the least use out of them. Whatever- you’re supposed to dress for the climate you want, not the climate you have, right? Ha! I knew my vision for this cape was way different than the original one I had planned in the orange boucle, but I also realized that this is exactly where my tastes are today- classic, chic, and simple (she types, as a pile of animal print faux fur sits in her craft room waiting to be turned into a swing coat LOOOL). Anyways, this time I made sure to trace the missing piece from the pattern that I had somehow forgotten about last time, and I cut everything out from this beautiful Japanese Glen Check wool. I figured that the plaid was busy enough that my non-pattern matching wouldn’t be super noticeable, but I’ve also learned after years of sewing that the less attention I pay to pattern matching, the better it comes out. I swear I have been meticulous about trying to get lines to match up before to absolutely no avail, while other projects seem to magically match up at the side seams. This cape is not perfectly pattern matched, but considering it was not a priority for me, it didn’t come out too badly! This Vogue Easy Pattern was actually pretty easy (a lot of them are more appropriate for intermediate sewists, which I personally don’t mind, but I know can be a little stressful if you’re a beginner and feeling like the project is too advanced for your skillset- though I have to keep reminding myself that “Very Easy” doesn’t necessarily translate to “Beginner”), and suitable for a relatively quick sew, seeing that this pattern isn’t very fitted, so won’t require too many tweaks or adjustments. Mostly you just want to make sure the shoulders suit your frame well, that you have enough room in the front if you have a large bust, and that the length is right for you (I shortened mine just a bit as I am petite and I didn’t want to be completely dwarfed by a big wall of plaid when I wore this thing). The construction is very straightforward- it consists of two main pieces: the front center panel and the back cape, which attaches to the front panel on the sides with buttons. You can also make a belt that doesn’t actually attach to the cape but just ties around your body and holds the front panel in place. You can absolutely make and wear this cape without the belt and it’s super cute, but on me it was a bit shapeless so I love wearing it with the belt. You could also do well to sew a couple of belt loops on the front panel to hold it in place; depending on what you wear underneath it, the belt might want to drift around a bit so I might add them to mine just to make the belt feel a little more stable. The one thing I did to elevate this simple make was to make bound buttonholes instead of regular ones, because the buttonholes are the main closures to get in and out of the cape and therefore will have a lot of stress put on them. Bound buttonholes are generally much stronger in terms of stability in a bulky fabric like wool, but I also don’t like how my machine makes buttonholes on thick fabrics- they just look a bit unkempt and unprofessional, so whenever I work with thick wool fabrics I opt for bound buttonholes (you can also get nice buttonholes professionally sewn in at a shop but I have no idea where to get that done in LA during COVID). And because I made bound buttonholes, the underside of the fabric was much thicker and took up more space than regular buttonholes, so I decided to face the whole top part of the underside of the front panel instead of just relying on the thin facings that were at the edges. It was a very smart idea and it also makes the whole panel a little bit warmer since it’s got two layers in the front (not that it will matter much here in LA, but who knows where the future will take me and my cute cape!) I like making bound buttonholes, but ten of them is…A LOT. VERY MUCH A LOT. I think it took me a whole day and a half just to complete them, but of course now that it’s all over, I am SO glad that I spent all that extra time on them. They look so nice! And they set my buttons off so well! Speaking of buttons, I found these (and about 6 other sets that I immediately fell in love with) from a vintage button shop on etsy based in Canada. They have the most incredible vintage buttons- none of that plastic crap that Joanns sells, these are all beautifully designed metal pieces with the most lovely details. There were so many that I liked, I’m pretty impressed that I limited myself to just to the 6 sets I got, but I rarely come across buttons that make me stop in my tracks so this seemed like a smart investment. I bought two sets to pair with this cape in hopes that one of them would work, and these lionheads were the clear winners (the other art-deco set I got in the correct size have a great design but were too bright gold for the colors of the cape- the dark, muted antique metal of the lions ended up being PERFECT). I’m just crazy about how well the buttons work- they feel ornamental and extravagant paired with a fabric that feels a bit utilitarian and unfussy. A little too much paired with a little too little, ending up in “just right” Goldilocks territory! Thanks as always to Claire for the pictures! Projectors for Sewing
Scroll to top