For those of you who grew up in the 80’s like me, you might remember a special Barbie Doll that made her debut wearing a floor length ruffled gown in a gorgeous shade of peach. The dress had a white sparkly bodice with sheer layers of polyester that cascaded into a wave of gathers at her feet, and a long, peach colored boa wound through her arms, the perfect accessory for this doll made in the era of TV’s Dynasty. 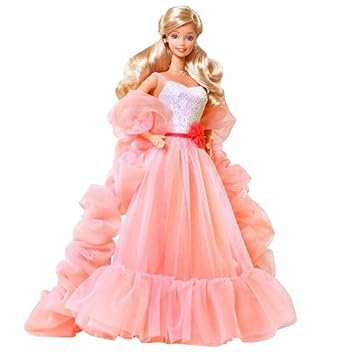 I was obsessed with this doll, and I didn’t get obsessed with toys very often. I knew we were poor and, from a young age, I understood it’s implications- asking for things that I knew my parents couldn’t afford seemed not only pointless, but also hurtful. I felt sure that they would give me the world if they could, so why make them feel worse than they already did? Still, this doll’s aesthetic tapped into some deep need I had, a need to exude wealth, class, and importance, to appear to be like all the other girls that I went to school with. Peaches N’ Cream Barbie represented the kind of woman who didn’t worry about money or holding down two part time jobs to make ends meet- otherwise she would not be dressed so extravagantly. She seemed confident and capable, the life of the party, good at holding court with esteemed individuals, which was something I aspired to. Why wouldn’t I be obsessed with her?

Although I never imagined that my wish would come true, Peaches N’ Cream Barbie ended up on my Christmas list, which, since my parents were not together anymore, needed to be duplicated so they could each have a copy. My mother, pragmatic as she was, must have sensed the magnitude of having this doll in my life, because on Christmas morning of that year I tore off the wrapping of a box to find, instead of the sweater or package of underwear I usually got (she, like many Moms without much disposable income, used Christmas as a way to replenish more of my needs than my wants), a beautiful Peaches N’ Cream Barbie Doll! But…she was black. For some reason I hadn’t been expecting that. To be honest I am not even sure I knew that Peaches N’ Cream Barbie CAME in black, because the black dolls didn’t end up in the commercials very often. I was thrilled that my Mom bought her for me, but I also had conflicting feelings stirring up inside that I had no idea what to do with. My Mom, (who is white), had always made it a point to buy me black dolls. I think she was trying to make up for the fact that I went to a predominantly white school, lived in a predominantly white neighborhood, and I only got to see my Dad (who is black) two weekends out of the month because that’s the way the custody battle went. She didn’t want my Southern white surroundings to damage how I felt about myself, and she understood the importance of me seeing myself in the things I played with. I know that now, and I appreciate it deeply. But at the time, I hated it. It was simply another reminder that I was different from everybody else in my life.

I pet my news doll’s beautiful dress and combed her dark hair that was straight and glossy and not like mine at all and waited for my Dad to pick me up and take me to my grandma’s house to celebrate Christmas with him and my cousins. There, I joyfully opened up toy after toy after toy- not an item of clothing in site- and stared in disbelief as I ripped the paper off my last present and found yet another Peaches N’ Cream Barbie, this time the one with blonde hair. My white Mom had bought me the black Peaches N’ Cream doll and my black Dad had bought me the white one (clearly my parents were not on speaking terms at this point in time). There was a sense of relief that I finally had the “right” doll, the one I had been hoping for all along, but in the coming weeks, as I held the two dolls in my hands, each exactly the same save for their coloring, I was suddenly faced with the real root of my dissatisfaction. I liked the white one because that was the one that all my white friends had, and that made me feel normal. But the doll itself didn’t make me feel normal- she looked nothing like me. It was like playing around with a fantasy that I had no say in creating. And the black doll didn’t look like me either; her skin was darker than mine, and she still had hair like the white doll, just in a different shade. I didn’t see myself in either of the toys, but I felt shame for liking the white doll better and frustration for not understanding why. Of course now I know that this is what happens when you live in a white supremacist society, but back then I just felt alone. I decided to make my dolls be cousins related by marriage for a while, but eventually they started kissing and became secret girlfriends, which is what happens when you also live in a homophobic society, but I digress.

Growing up, leaving Alabama, spending my 20’s in NYC- all of it helped me start unpacking the harmful rhetoric that I learned as a kid and replacing it with values that embraced all my different identities. I am still in the process of forgiving myself for not being prouder of who I was at a young age, which is hard- it’s even difficult to write these words here on my blog. But I do it because, if I have learned one thing since leaving Alabama, it’s that I am not alone at all. There are so many people around the world who have struggled to name their identities, to find a place that feels comfortable, to accept that this place might not be comfortable for others, and to not apologize for it. And if my words can make any of those people feel less conflicted about living their lives proudly and boldly, then it makes talking about it completely worthwhile. So here I am decades later, a grown, Barbie-less woman, when I enter The Fabric Store and come across the extraordinary textile you see here. I am immediately drawn to it and I realize that it’s because of the colors- the peach and white combination of my youth holds the same amount of power over me now. And when running my hands over the soft material on the roll, I flip over a corner to find that it’s reversible! Well, maybe it’s not reversible- it’s possible that one of these sides is meant to be the “right” one and the other is meant to be the “wrong” one. But see, I know better than that now. Barbies don’t have “right” skin tones and fabrics don’t have “right” sides. Which is why I used both. I thought that the graphic print and stable weight of this fabric would look really cool with a structured bodice, and then I remembered how great the cut-outs on the Bonnell Dress from Dixie DIY were. So I coupled the top from that dress with my circle skirt block, drafted with instructions from Gertie’s first book, Gerties’ Book for Better Sewing. The result is a perfect fit’n flare design that looks absolutely phenomenal with the body of this fabric! I don’t normally combine prints or think outside the box with my fabric choices, but this fabric made it pretty easy. It is so soft and airy and has an almost quilted feel to it because of the way the fabric is made- it looks a little like a double gauze, with two lightweight pieces of fabric tacked together through the lines of graphic print, the colors reversed for each side. The bodice from the Bonnell Dress is a very straight-forward make with great instructions- a fully lined bodice with cut outs on each side that connect to a waistband, closed with an invisible zipper in the back. Trading the gathered skirt that goes on the original dress with a circle skirt was easy, and I omitted the pockets to save time. I used french seams for both the skirt and bodice to keep the insides tidy since this fabric has a tendency to fray, and when it was all done, the completed dress looked almost reversible! The only thing to give it away is the invisible zipper, which isn’t so invisible on the inside, but I could probably still get away with wearing it inside out if I danced the whole time that I wore it. Which is not outside of the realm of possibility for me. I debuted this dress a couple of weeks ago at an event for an organization called Campus Pride, which promotes creating safe spaces on college campuses across North America for LGBTQ students through education, leadership and community. As you can imagine, it was a huge honor for me to accept the Voice and Action award along with the other recipient, Miss Lawrence, and it was a pleasure to meet so many amazing students, mentors and staff at the ceremony. In my speech, which Autostraddle will be publishing later this week, I talked about intersectionality and how my various identities as a queer, biracial woman of color sometimes inform one another; it was a happy accident that I wore this particular dress to the event, which seemed to embody a lot of the things I discussed that night. Thanks again to The Fabric Store for the gorgeous textile, to Campus Pride for giving me an opportunity to speak, and to Claire for the lovely photos!

Bees on a Dress