This suit has been a long time coming! I first envisioned it in my head over a year ago when I went to a screening/talk-back of our film Suicide Kale (have I mentioned lately that you can watch it on Amazon Prime and itunes now??) One of the super talented actors in our cast, Haley, was wearing THE FIERCEST ensemble, a floral suit comprised of a jacket and shorts, and I know I wasn’t the only one bombarding her with comments on how amazing she looked and how fantastic the suit was! I can’t remember where she got it- I think she said Top Shop, but that part didn’t matter since I knew that I could make it myself. I took my time deliberating the details of this make, which is why it took so long to actually put into action, but I don’t mind- patience is often my best asset, and I think it really paid off in this case. I wasn’t deliberate about choosing my fabric, which I knew I wanted to be bright and floral; instead, I waited for the perfect print to fall into my lap, which it did earlier this year on one of my monthly trips to The Fabric Store. I came across a crisp…well, I have no idea what you would call this fabric. It has the weight of a medium-weight twill, but it’s not a twill. It’s got various sized threads running through the warp and weft which give it a substantial and interesting texture, but it’s not as stiff as the weight would have you believe. I fell in love with the color first- it’s a vivid orange that kind of toes the line between pink and red, and the large print of the yellow flowers give the fabric even more drama than the bright background color. This is the kind of bold print that matches perfectly with a bold ensemble, in my opinion. Bad news: when I washed this fabric, something bled on it. I don’t know if it was the fabric itself or a different yardage (I usually pre-wash like colors together), but the spotting throughout the fabric is dark blue, much like the dark blue stems running through the print. Because the colors are so bold and the print is so busy, it’s really hard to see the bleed if you aren’t looking for it, and you KNOW I’m not one to waste fabric. I have only had limited success using those products that are supposed to clean up bleed from your fabric, and during one employ a month or so ago, it yielded an absolute disastrous result! So I decided to forgo an attempt to clean the bleed up and just cut my losses, which I do not regret. The bleed actually reminds me of some Ankara fabrics I have seen, which sometimes bleed on different parts of the bolt in the printing process. As for patterns, I pinned several suit jackets over the past year and finally settled on Butterick 5926, which was casual enough for the overall look I was going for but sophisticated enough to look lux! Unfortunately, it wasn’t until I was tracing my pieces that I realized the pattern was intended for knits, and my bright floral fabric was decidedly woven. Now, I know there is wiggle room between patterns meant for knits and those meant for wovens- you can usually adjust the size of a pattern to accommodate whatever kind of fabric you want, but I don’t have that much experience with those kind of alterations and wasn’t really interested in testing my learning curve on this particular project, which I had been dreaming up for so long. So I quietly cursed myself for not paying enough attention to the details, folded the pattern up, and went back to the drawing board (or rather, the pinterest board). This time, with much fretting and hand-wringing, I settled on a Burda pattern. I won’t be a broken record and tell you for the millionth time how much I dislike working with Burda patterns, but I thought that since I had been pretty successful with my last Burda attempts (see these pants and these pants!) I could surely manage to figure this pattern out. Long story short? I was wrong. W-R-O-N-G. Bottom line for me with Burda is this: don’t attempt to make a complicated Burda pattern that you haven’t successfully constructed a few times before. Burda isn’t meant for instructing you on how to do anything new, it’s meant for the (mostly) well-drafted patterns. Everything was going fine until I got to the lapels, and then…akjshdghasjgd kjshagajsh! At one point, Burda instructed me to do the exact same step two times in a row, with different techniques; clearly someone copied and pasted from another set of instructions but didn’t edit the final draft. Thank goodness I was working from a muslin, otherwise my fabric would have been ruined, and I didn’t have any to spare. One of the reasons I chose the Burda pattern was because it had a cute, modern shape and the material it called for was a woven, but after I started to cut the muslin fabric out, I realized that the details of the completed jacket in the photo for the pattern stated that it was made of a striped KNIT fabric. WTF?!? Which is it, Burda?? I contemplated going back to the pinterest board for a third time to hunt down yet another jacket pattern with more substantial instructions to help me on the tricky parts that were new to me (I had made only one suit jacket before  and it didn’t have traditional lapels), but ultimately I decided to go BACK to my original Butterick pattern, the one I had abandoned when I realized that it was meant for knits. After studying the pattern cover, I convinced myself that the knit fabric wasn’t drafted to be clingy or tight on the body, and reading the finished measurements on the pattern pieces, I realized that it didn’t have negative ease- the body skimming drawings on the cover were why I had picked the pattern in the first place, and they seemed to hold true to the actual design. Big 4 patterns tend to swallow me whole, no matter how perfectly I fit into the measurements for a particular size, and I hoped that the disconnect in sizing would work in my favor for once. Thankfully, it did! The second muslin I made with the Simplicity pattern came out great and the instructions for the collar and lapels were clear. Despite being intended for knits, the jacket was still too big, specifically in the shoulders- the top of the arm dropped down too far and I had to shorten the shoulder seams a bit (an adjustment I make on almost all Big 4 patterns), but it was easy to fix. I went back and forth about whether or not I should line my jacket, but seeing as how it would be intended mostly for wear in the spring and summer, I didn’t want to make it so hot with extra fabric that it would be uncomfortable to wear. Instead, I used Hong Kong seams with bias tape on the visible inside seams and serged the others that you couldn’t see. After a quick trip to Joann’s, I found the perfect antique brass buttons for the front of the jacket, and she was complete! For the shorts, I used a vintage TNT pattern (Simplicity 7688) that I have made a few times before with great success. I decided to omit the rectangular waistband that comes with the pattern and instead use my curved waistband from my Ginger Jeans pattern, which I love. Unfortunately, I didn’t take into account that the jeans’ waistband is drafted for pants that close in the front, and my shorts are drafted with a side zipper. DOH! I didn’t have enough fabric to recut my waistband after realizing my mistake so I had to work with what I had, which was easy enough to do but means that I have a random extra seam stuck into the waistband. Again, probably not visible to anyone looking at the shorts if I don’t point it out to them, but the other good news is that I bet you a hundred dollars I don’t make that same mistake again! I think this ensemble would look really cute with a button down shirt underneath it when the weather gets a bit cooler, but seeing as how we are smack dab in the middle of July and first wore this outfit to SDCC a few weekends ago to promote our new Amazon kid’s show Danger & Eggs, I am opted for the most temperature appropriate version of the look, which was a simple off-white v-neck knit t shirt paired with the jacket- fabric for that shirt is from Organic Cotton Plus and pattern is the Lark Tee from Grainline Studios, which comes with several sleeve and collar options.

I am thrilled with this whole look, with the fit, and with the success of the jacket construction! And I am super excited that something that has been on my to-make list for so long actually saw the light of day! Now I just have to convince Hayley, the friend who inspired me with her own RTW shorts suit look, to head out on the town with me so we can sport them at the same time! And now to close, here is an awesome shot of our Danger & Eggs cast in one of the photos we took to promote the new show at Comic Con- I was drooling over Aidy’s outfits all weekend, they were absolutely gorgeous and I want to copy every single one! 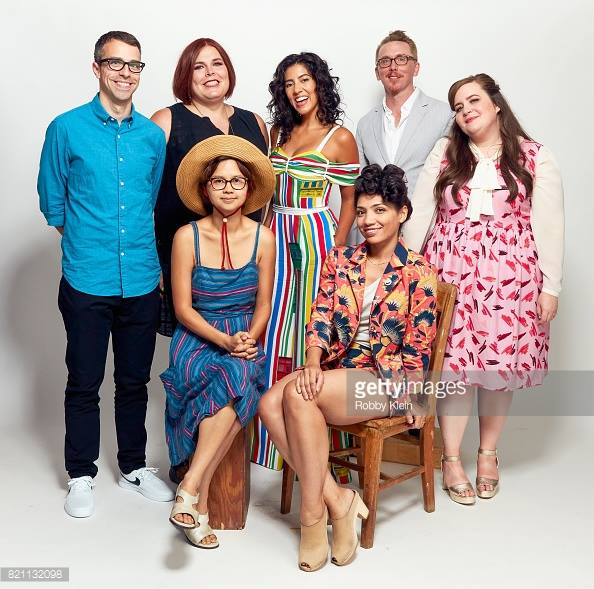 Where In The World Is Sika San Diego?
1 reply

Fit For A Costa Rican Wedding